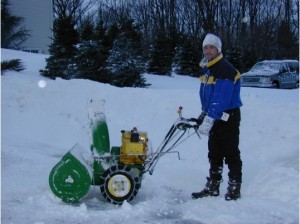 Along with winter storms come a rash of snowblower injuries, many severe, that result in  amputation.

Dr. Jay Talsania, OAA Orthopedic Hand Surgeon in Allentown faces traumatized patients every winter from amputations from snow blowers. In one storm in January, 2010, he performed six procedures in one day while on call at LVHN. 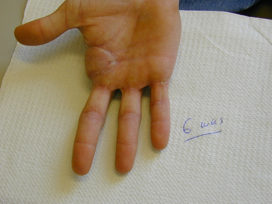 As quoted in The Morning Call at that time he said ”Yeah, that was just Saturday afternoon,” ”Happens every storm. It’s as predictable as people blowing their fingers off on the Fourth of July.”

In that one day alone, he operated for nearly eight straight hours amputating fingers and repairing broken bones in the hands of men injured while blowing snow.

Snowblower accidents have become almost an epidemic, largely because people aren’t taking the right precautions, Talsania said. A report from the U.S. Consumer Product Safety Commission says 5,740 hospital emergency room injuries a year are caused by snowblower mishaps, but Talsania said his own experience tells him that the number nationwide is much higher.

According to the American Society for Surgery of the Hand, the profile of the snowblower accident victim is remarkably consistent; a 30- to 50-year-old man blowing wet, heavy snow in temperatures just below 30 degrees.

When a snowblower exit chute clogs, it’s normal for a person to believe the blades have stop. Unfortunately, that is not the case and it is not realized until they reach their hand into the unit.

The quick remedy, use a stick or the end of a handle from a shovel. Never put your hand in the chute. The better answer is to turn off the blower, disengage the clutch and wait five seconds to allow the blades to stop completely.

”The psychological injury is almost as bad as the physical injury,” Talsania said. ”The guy goes through life constantly regretting what he did because it is so, so preventable.”

Additionally, never remove the safety devices in the machine. They are there for a reason.

And don’t drink and plow.

That last one might sound like a joke, but Talsania said an unusually high number of injuries happen to people who are alcohol-impaired.