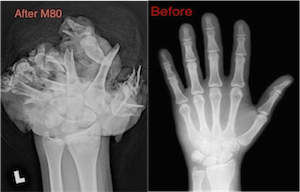 Surgeons’ viewpoint: Injuries from fireworks not worth the risk
July 03, 2009|By Drs. Jay Talsania, Patrick McDaid and Richard Battista Special to The Morning Call – Freelance

The statement by Julie Heckman, executive director of the American Pyrotechnics Association, that “consumer fireworks have never been more safe than they are today … fireworks-related injuries have decreased by more than 90 percent” made us cringe.

These statements in an article last weekend in The Morning Call, although they may be true, can imply that fireworks are generally safe for the public.

The hand surgeons at OAA Orthopaedic Specialists in Allentown and the American Society for Surgery of the Hand urge the public to enjoy the displays put on by professionals in your community and avoid a potentially life changing injury in your backyard. People underestimate the severity of injuries from fireworks. Traumatic amputations from explosions are permanent and can change career paths and everyday hand function.

The latest report from the Consumer Product Safety Commission shows there were an estimated 7,000 hospital emergency-room treated injuries in 2008 with seven deaths, down from 2007 with 9,800 injuries and 11 deaths. Remember, a majority of these injuries occur in a period of only one month between June 16 and July 16.

As hand surgeons, we want to share some facts so the community can better make a decision regarding the purchase and safe use of fireworks this coming holiday weekend.

The CPSC data reports that the most frequently injured body parts in a firework-related injury are the fingers and hands. Most injuries occur through a misuse of a firework rather than a product fault. Of the finger, hand and arm injuries, the majority of injuries were caused by firecrackers, bottle rockets and sparklers, the three most commonly used in celebrating Independence Day at home. Simple sparklers can burn up to 1,200 degrees Fahrenheit.

More than half of the injuries occur in males 15-25 years of age, but 25 percent occur in children ages 5-15. Children are often excited and curious around fireworks, which can increase their chances of being injured (for example, when they re-examine a firecracker dud that initially fails to ignite). Also, homemade fireworks,such as ones made of the powder from several firecrackers, can lead to unpredictable explosions with higher energy levels and more tissue destruction.

These explosives do a great deal of damage and often blow off fingers or entire parts of the hand. More often, these parts are gone and can’t be reattached.

Please be safe this holiday weekend and leave the fireworks to the professionals.