News Doctor’s Volunteer Work Changes Lives, Including His Own

Doctor’s Volunteer Work Changes Lives, Including His Own 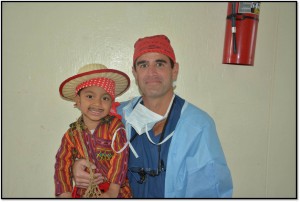 Like many individuals who turn 40, Jay Talsania of Fogelsville took a close look at his life. He was successful. He was happy. But something was missing.

However, instead of experiencing the cliché midlife crisis often portrayed in popular culture and on TV comedy shows, his self-examination led to a decision that would affect countless lives.

“I felt there was more I could do, give back more to the community,” he explains, adding, “I’ve got skills. How can I help?”

“He is involved in the Guatemala Healing Hands Foundation and he invited me to come along on a medical mission,” Talsania recalls.

That was back in 2007, and Talsania, of OAA Orthopaedic Specialists, South Whitehall, has been returning to Guatemala every year since, sometimes with his supportive wife and two children in tow.

Through the non-profit, volunteer-run organization, teams of physicians, therapists, surgeons, nurses and other qualified professionals travel, entirely at their own expense, to Guatemala to perform hand surgery and hand therapy and to train local healthcare providers.

Talsania, who has an undergraduate degree in mechanical engineering, says he performs pediatric work during the 12-day missions in Guatemala.

“Every year brings a new, interesting case. It’s a learning experience,” he explains. “I see challenging deformities and do a lot of reconstructive work. I treat kids with two thumbs or no thumb. I work on broken elbows that didn’t heal right because the kids didn’t get medical treatment.”

He adds, “There are no doctors in the villages. Many of the residents still live in mud huts.”

Some children have traveled 10 hours by bus to be treated by the doctors who volunteer their services with the organization, according to Talsania.

He says most of the hand and arm problems are congenital or are caused by injuries and burns.

“They cook over open flames,” he notes.

Talsania says the Guatemala families, who have neither money nor insurance, are extremely grateful for the services provided by the foundation’s team of healthcare professionals. And for him, that’s payment enough.

One of his patients, a boy who lost both hands in a bus accident, is an inspiration to Talsania.

“All he wanted was something to help him put on and take off his socks,” the surgeon recalls. “He was so happy when I made him an orthosis.”

One thankful father, whose child had been treated by the medical team during a previous visit, rode two buses over many miles to reach the physicians during their last mission. The man’s purpose? He wanted to show his appreciation to the doctors with a gift. He brought them pencils.

Talsania doesn’t “pack light” when he travels to Guatemala.

“We take along everything: sutures, drills, plates and screws, medical supplies,” he explains.

A retired nurse friend in Lehighton collects and donates casting material, bandages and other medical necessities, he says. Talsania’s daughter, friends, patients and neighbors donate gently-used or new clothing and shoes for both children and adults in Guatemala.

Most of the people have small feet, according to the doctor, but, he says, “They will take a size 9 shoe and stuff paper in it and love it.”

Talsania already has four large bags of shoes in his garage awaiting his upcoming mission trip in November. He also takes along colorful finger puppets fabricated by his family’s piano teacher.

In addition to the medical help provided, other volunteers who accompany the doctors perform valued services during the annual Guatemala missions.

Talsania’s son and his soccer teammates at Hamilton College helped to build a school.

Although he and the other medical professionals work 14-hour days while on the mission, they also make time for fun.

“We took a volcano hike in the dark and cooked grilled cheese on the lava,” Talsania marvels.

He also tried zip-lining in Guatemala and described it as “terrifying” and “exhilarating.”

The Guatemala Healing Hands experience has changed Talsania’s life. “The rewards are immeasurable. Often just one operation can make a big difference in someone’s life,” he explains.

In yet another way, Talsania and his family are changing young lives in Guatemala.

The medical missions to Guatemala “redefine your energy, remind you what the real world is like,” Talsania says.

“Every year it refreshes why I became a doctor. This has made a huge difference in my family, in raising my kids. They understand what’s important in life.

“They see people with no money who are very happy for all the right reasons. Both my kids are empathetic.”

Talsania challenges others to become volunteers.

“If you’ve never volunteered, try it. It’s a great feeling. You don’t have to go to Central America to help people.”

As for himself? Talsania will return to Guatemala.

“I foresee myself doing it every year, forever. It’s addictive,” he declares.

Thursday, May 5, 2016 by BONNIE LEE STRUNK Special to The Press in Local News